Want to know more about my work?

Pricing varies on size and illustration. 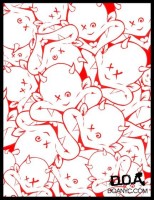 It has taken me some time to self educate myself about art and design. For many years I have continued to improve by working with many known talented artists, and I will continue perfecting my work until the day I die. Its something in my blood. A gift that has shown itself through my hands.

Timeline of my talent:

1988 started to really become interested in drawing through inspiration from my late Unce John.

88-92 continued to grow with creativity, idea, and admirality for cartoon and street art.(dabbled in the basics of colored pencils, and design markers, blackbooks, and small use of aerosols.)

92-93 really overtaken by the desire to acquire a name and skills in the artform of graffitti.

Late 93 I attempted my first large scale mural at my elementry school as a graduating class project.

1994 was painting with local friends, and perfecting my art book, and can control skills.

95-98 continued to develop, along with a great start with commisioned work, also in 1997 had a feature in the Staten Island Advance titled "If you can't beat em, join em" discussing who I was and what I did within the community in a postivie manor, and was formally invited to paint at the Phun Factory, which is now known as 5 Pointz.

99-2004 Remained a growing name within the street arts community, along with a great resume and reputation for my professional demeanor and skill.

2004-05 Linked up with The NYC arts cypher which is a non for profit 501 c center, and continued to build connections and networks while non stop work and development was, and is occuring.

2006 While continuing to thrive in my career and style, working privatley, and publicly through The NYC Dept. of educations arts networks, and also teaching through a program in Port Richomd high school know as the Center for interpersonal development for children interested in follwing a positive path through creativity. I also at this time was illustraing, screen printing, designing, sewing, and marketing my own small brand of street clothing named DOA NYC.

2007-11 Presently have been continuing to work along with The arts cypher and the M.U.R.A.L project which also took in first place for best documentry in the Staten Island Film festival. Also had featues in industry magazine, small articles regarding other projects, Graffitti New york book, and smaller private prints.

You tube link to the documentary trailor